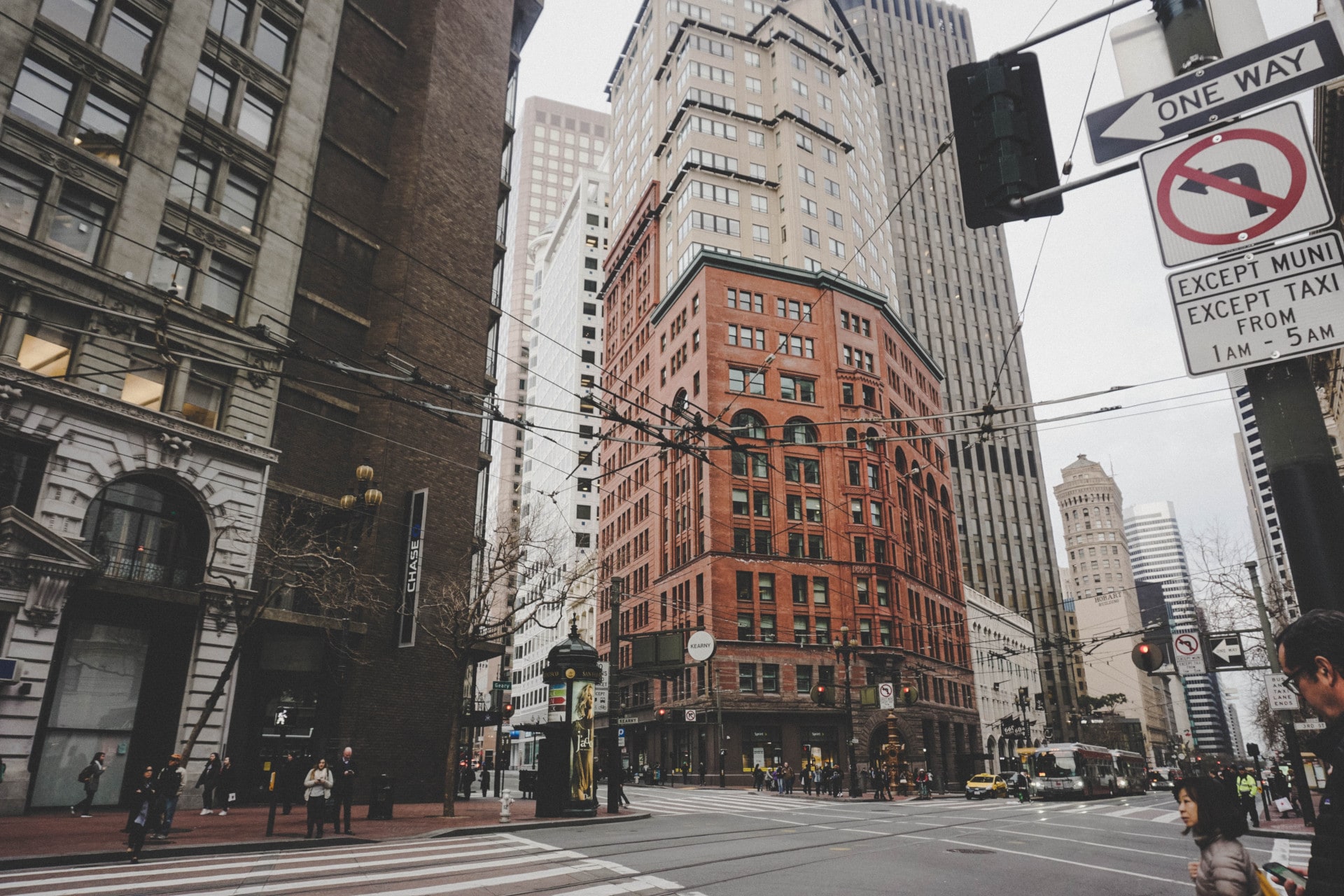 Being a pedestrian in San Francisco is rough. In fact, it’s deadly. More vehicles than ever are on the road. Latest statistics show that 15 pedestrians were killed at an intersection in 2018. 55 were critically injured and 183 suffered severe injury from a motor vehicle. Pedestrians remain in proportion, particularly exposed road users but it is all the more true for blind and low vision people. In fact, have you ever wondered how do visually impaired people cross the road?

If you live in San Francisco, a leading city that has long pride itself on inclusion, you are entitled to wonder if it is now implementing measures to provide for more safety and autonomy to those who cannot see.

How inclusive and accessible is San Francisco now? This article provides for an overview of San Francisco’s policy towards blind pedestrian safety. 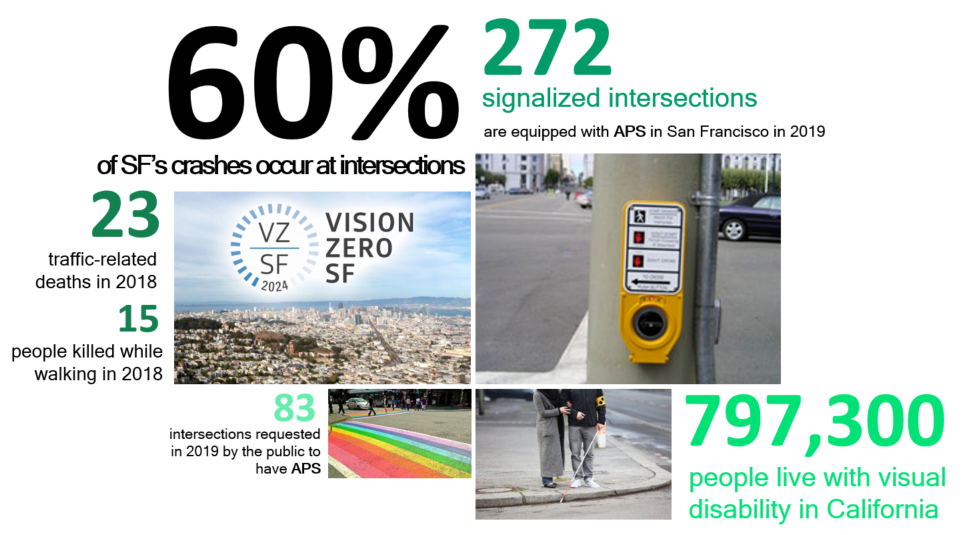 With 797,300 people living with visual impairment in California, the State holds the record for having the highest number of people with visual disability of the United States. The Fog City itself has identified no less than 18,162 blind people that need help navigating streets.

If the city invests in the safety of its citizens including those with disabilities, intersection crashes continue to cause serious injuries and kill pedestrians every year.

San Francisco is made for walking: commitments to a Walkable City

When we talk about walking in the street, we inevitably talk about crossing them. As long as we stay on the sidewalk, in principle everything is fine. But the number of intersections in San Francisco was estimated at 18,525. Thus the probability of having to cross the sidewalk is high. Let’s add the 492,988 vehicles that plow the city every day. That’s when things get complicated.

For several years, the city of San Francisco has been following a process of gradual transformation based on the strong idea of ​​a shared use of public space, where all modes of travel have the same rights in the city. The goal is to restore the place to pedestrians by organizing a harmonious and safe cohabitation between them and the vehicles.

With its slogan “San Francisco is a city that walks”, the SFMTA  is carrying out its Pedestrian Program including the School Safety Program to ensure safe route to school and quick effective measures turning intersections into safe areas such as:

To further lead people to choose to walk for most short trips, ex-mayor of San Francisco Edwin M. Lee has implemented the San Francisco Pedestrian Strategy in 2013. This action plan is broken down into various measures mainly impacting crosswalks such as:

Latest Vision Zero end of year report shows that there is room for progress. To meet the 2024 ultimate goal, ex-Mayor Lee partnered with the SFMTA and Department of Public Health to present the WalkFirst program as part of Vision Zero global action plan.

By providing technical and statistical analysis of where and why pedestrian collisions occur in the city, the Vision Zero program is able to provide a roadmap of needed pedestrian safety projects for upcoming years. The City has leveraged $17 million for this project at 170 high-priority locations identified by WalkFirst.

Our streets should be safe to everyone including the young ones, the elderly and the disabled. That is part of the definition of an inclusive city which is partially addressed in the city’s three programs presented above.

But San Francisco is going one step further.

To provide safety and autonomy for blind people when crossing the road, San Francisco has adopted a policy to implement Accessible Pedestrian Signals (APS) throughout the city.

An Accessible Pedestrian Signal (APS) is a pedestrian traffic light equipped with an audible and/or tactile signal that allows people with visual limitations to cross at an intersection.

In a context where the multiplicity of vehicles using the roadway complicates the analysis of the circulation by the ear and where the tactile cues are not always implanted so as to constitute an effective marker, audio guidance on pedestrian traffic lights is a much-needed technology for visually impaired people.

Find out why Accessible Pedestrian Signals (APS) are a vital solution for the visually impaired in this article: How Do the Blind Safely Cross the Road?

San Francisco was the first city in the United-States to address this critical pedestrian safety issue back in 2007.

In the Accessible Pedestrian Signal Settlement Agreement the city agreed to install at least 80 intersections with APS and to spend a minimum of $1.6 million on APS over a 2½-year period. The agreement also provides that the city will seek additional funding for more installations.

This agreement is the result of a successful multiyear advocacy campaign by the California Council of the Blind, the San Francisco LightHouse, and others. Before the campaign, only one intersection was equipped with Accessible Pedestrian Signals located at San Francisco State University. Using structured negotiations, members of the visually impaired community and the city jointly came to an agreement in 2007 that has resulted in the installations to date.

In the span on the three years following the agreement, San Francisco has equipped 36 new intersections with APS (116 in total) making San Francisco the national leader on this important safety issue.

In 2010, the City received more than $200,000 in federal funds in order to equip 5 additional intersections with Accessible Pedestrian Signals (APS).

According to the SFMTA last update in March 2019, 272 intersections of San Francisco are equipped with APS. The full list is available here. 83 other intersections are upon request by the public to have APS installed.

“SFMTA’s policy is to install APS at all new traffic signals, and at any existing signalized intersection that is undergoing a major signal upgrade.”

Considering all the undergoing and future roadworks of this constantly moving city, APS units should increase if the policy remains the same.

SFMTA also receives requests from users and local associations to install APS at specific intersections. Theses requests are subject of a prioritization according to those three criterias:

⊗ Whether any work is being planned at that intersection.

⊗ Whether an APS is likely to be installed within the next three years.

These prioritization criteria are intended to sort out user requests, which can not all be met due to limited funding.

So far San Francisco has been setting out the exemple for other worldwide cities in terms of pedestrian safety. However, only 1,47% of intersections are equipped with APS leaving scope for even greater commitments from the city.

Also, it seems that SFMTA has been moving at a slow pace in the last two years when it comes to installing APS in the city. On an average, 17 new APS units have been installed since 2010 but it looks like this number is declining. Is San Francisco going to lose its leading position on the world’s accessibility podium? More than 18,000 blind San Franciscans are keeping a close eye on the project.

Want to go one step further? Find out all you need to know about APS regulation in Toronto. 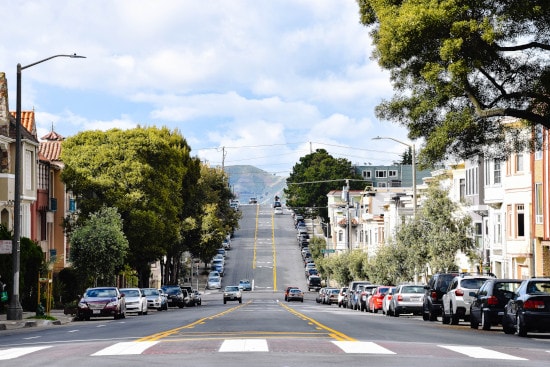 SFMTA’s policy is to install APS at all new traffic signals, and at any existing signalized intersection that is undergoing a major signal upgrade.