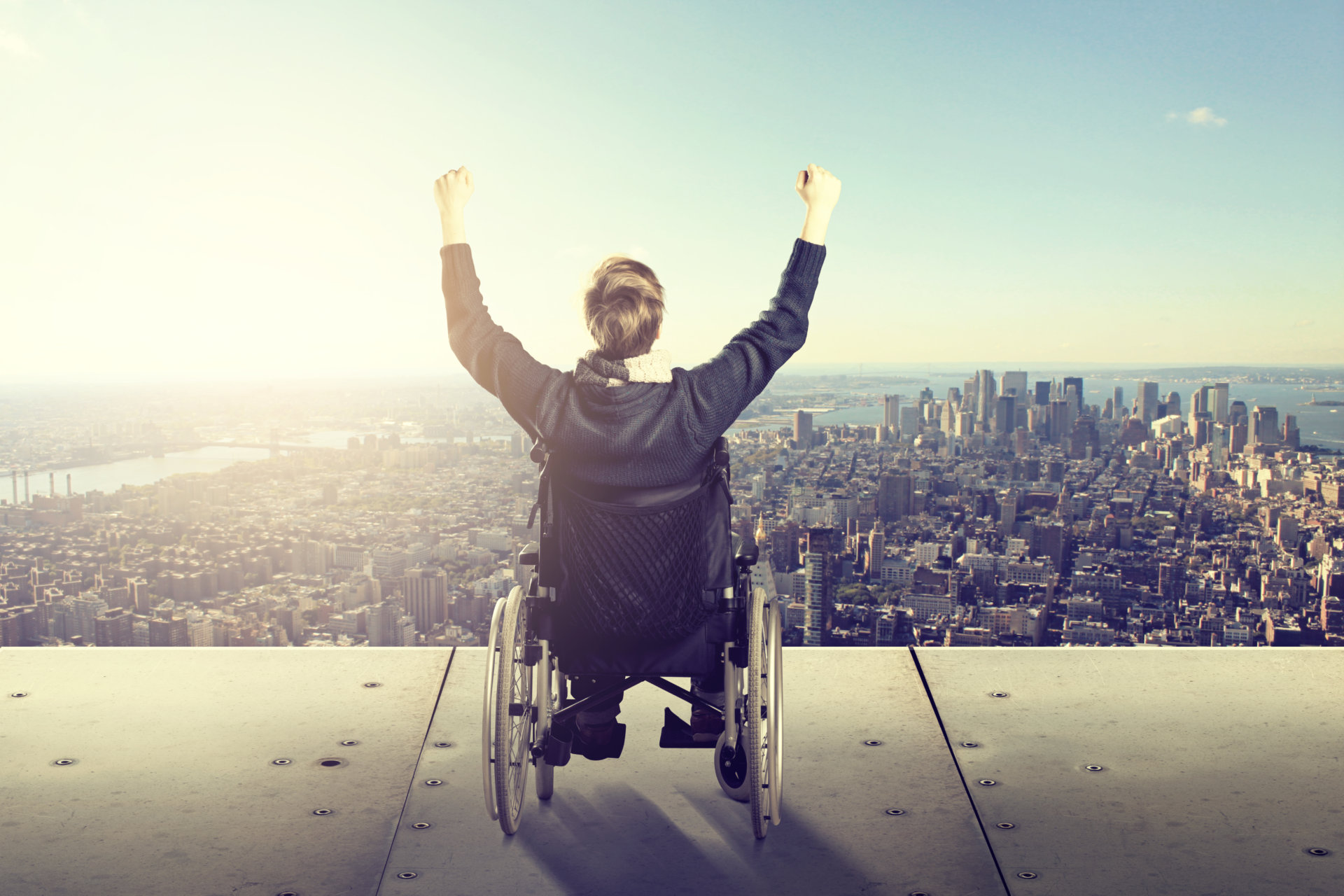 Disabled People in the World: Facts and Figures

There are currently more than 1 billion disabled people in the world. According to the World Health Organization (WHO) a disabled person is anyone who has “a problem in body function or structure, an activity limitation, has a difficulty in executing a task or action; with a participation restriction”.

What are the different types of disabilities? How many people are affected? Which populations are most at risk? What impact has COVID-19 had on people with disabilities? Let’s take stock of the facts and statistics around the world.

How many people have disabilities in the world?

You may not see disabled people in your everyday life, and yet the WHO has identified over 1 billion disabled people, 20% of whom live with great functional difficulties in their day-to-day lives.

A few outstanding figures of disability around the world (according to the WHO’s 2011 report):

⊗ 253 million people are affected by some form of blindness and visual impairment. This represents 3.2% of the world’s population. That’s twice Mexico’s population*!

⊗ 466 million people have a disabling deafness and hearing loss. This represents 6% of the world’s population, that is to say all of the inhabitants of the European Union!

⊗ About 200 million people have an intellectual disability (IQ below 75). This represents 2.6% of the world’s population. It covers the number of inhabitants in Brazil!

⊗ 75 million people need a wheelchair on a daily basis. This represents 1% of the world’s population. That’s twice Canada’s population!

These statistics may remain an evolutionary average, but one thing is certain: the number of people affected by any form of disability represents a significant part of the world population, from children to adults alike. It is also important to underline the fact that some people may have multiple disabilities. This explains why the total number of people with disabilities in the world isn’t equal to the sum of people with disabilities per disability type. Indeed, the same person can be both deaf and blind.

What does an impairment mean exactly?

⊗ Hearing impairment: you can be affected by hearing loss as soon as you lose 20 decibels. It may affect one or both of your ears. Depending on their hearing loss, hearing impaired people can have hearing aids, cochlear implants, subtitles. When we refer to deaf people, this means they can’t hear anymore or barely.

⊗ Intellectual disability: the WHO defines it as “a significantly reduced ability to understand new or complex information and to learn and apply new skills (impaired intelligence)”.

⊗ Physical disability: this includes people with a physical impairment or reduced mobility. Thus, their mobility capacity may be limited in their upper and/or lower body.

More and more people are affected by disability every year. It is often the most vulnerable people who are most at risk. The WHO says that “the number of people with disabilities is increasing because of the aging of the population and the increase of chronic diseases”.

⊗ 80% of disabilities are actually acquired between the ages of 18 and 64, that is to say the workforce age (according to the Disabled Living Foundation);

⊗ People with disabilities have a more fragile general health;

⊗ The poverty rate is higher for people with disabilities.

These gaps are due to barriers to accessing health, education, transportation, information and work services – which many of us are taking for granted.

If we focus on children with disabilities and their access to education, the observation is quite dreadful: according to the UNICEF, around 240 million children in the world have disabilities, that is to say one child out of ten. They are 49% more likely to have never attended school compared with children without disabilities.

Depending on their disabilities, their situations and the country they live in, they are more or less included in society. Inclusion that we now set up will have a positive impact in their adult lives.

A definition of invisible disability

The concept of invisible disability takes its name from the forms of disability that are not apparent but that impact the quality of life. Among these are schizophrenia or deafness for example.

Far from clichés representing a disabled person in a wheelchair on the usual signage all over the world, the field of disability includes a vast range of disorders that are sensory, cognitive, psychological or chronic.

In the United States, about 10% of Americans have a medical condition which could be considered an invisible disability.

Learn more on this subject with our article:

People with disabilities and COVID-19

2020 was truly an exhausting year due to COVID-19’s propagation all over the world. We still struggle today to get rid of it even if the incoming of several vaccines represents a beacon of hope for us all.

We aren’t all equals dealing with disease and COVID-19 doesn’t make an exception! But it’s even more striking for people with disabilities who have had to deal with challenging issues due to their disabilities! Let’s see what consequences coronavirus has had on them.

Being visually impaired and being used to dealing with your environment through touch, what can you do when the world shifts and that you cannot touch anything anymore? Blind or visually impaired people suddenly lost all of their bearings. Plus they couldn’t always rely on the help of others. A lot of people were paranoid and scared for fear they might get infected by the virus if they guided a blind person offering their arm.

For deaf or hearing impaired people, communication with others could already be challenging before dealing with everybody wearing masks. Then they couldn’t lip read or decipher people’s emotions anymore. In order to leave no one behind, some people stepped up and created an inclusive mask to help hearing impaired people communicate and understand others. An inclusive world needs to include all categories of people. The inclusive mask is a perfect example of what an inclusive society should look like despite the fact that it’s not widely used yet.

We all had to adapt after losing our bearings but it was more difficult for some than for others. Some people with an intellectual disability struggled to understand why the world suddenly stopped and everything turned upside down. For them, sticking to a routine was extremely important, something COVID-19 played havoc with, causing a severe amount of stress.

A lot of public places implemented a specific system to let people in and out in order to avoid any contamination risk. For people with a physical disability, this could mean having to use a longer path or having to deal with narrower halls for wheelchair users. These situations can be both tiring and frustrating.

Generally speaking, a lot of people living in retirement homes or specialized medical centers were suddenly cut off from the outside world and their loved ones… Same as everybody, it had an impact, more or less important, on individuals’ mental well-being whether they have disabilities or not. Plus, the contamination risk remained present through the nursing staff. A continual and heavy stress for the families.

COVID-19 has increased inequalities in society regarding health. The United States and the European Union chose to first prioritize vaccination for the elderly, healthcare workers and people with serious health conditions. Just like a pack of wolves places its most fragile members ahead and its strongest behind to make sure that everybody gets through together. That’s the definition of solidarity!

As we can see, disability comes in many different forms and is progressing all over the world. While some disabilities are temporary, others, on the other hand, affect the everyday actions of people in the long term.

*For our demonstration, we took the liberty to give approximate numbers concerning the population of the mentioned countries.

Here are the correct numbers of inhabitants in 2021 for each of them: 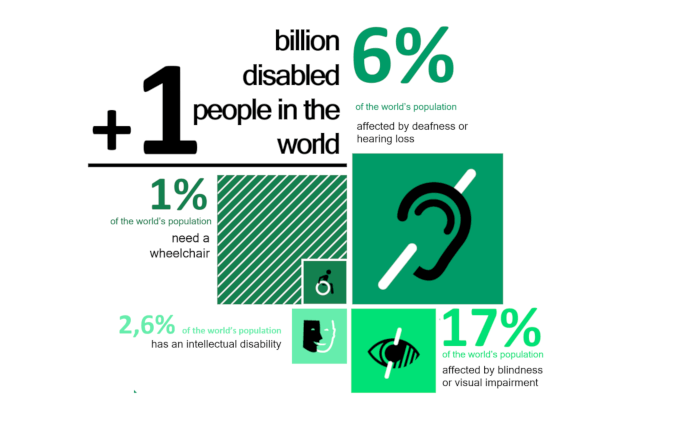 According to the World Health Organization (WHO) a disabled person is anyone who has “a problem in body function or structure, an activity limitation, has a difficulty in executing a task or action; with a participation restriction”.