France vs Quebec: How Do Accessible Pedestrian Signals Work Across the Atlantic?

On both sides of the Atlantic, accessible pedestrian signals allow blind or visually impaired people to know when is the right time to cross the street. But the regulations and technical features of these devices vary from country to country.

Let’s take stock of the differences, advantages and disadvantages of each system in France and Quebec.

Common feature: Accessible Pedestrian Signals are the responsibility of cities

Whether in France or in Canada, it is the local administration that is in charge of the equipment of Accessible Pedestrian Signals (APS). The government is only setting the obligations, standards and guidelines to follow.

In France, the equipment obligations stem from the Disability Act of 11 February 2005, which states:

“The transport chain, which includes the built environment, roads, public spaces, transport systems and their intermodality, is organized to be accessible to people with disabilities or reduced mobility.”

In Quebec, since 21 June 2019, the reference text is the Accessible Canada Act – An Act to ensure a barrier-free Canada. One of its founding principles is that: “all persons must have barrier-free access to full and equal participation in society, regardless of their disabilities”.

Paris has 1,770 signalised intersections, of which over 11,000 traffic lights have already been equipped with Accessible Pedestrian Signals (APS). On the other side of the Atlantic in Montreal, there are 2,300 signalised intersections, and only 200 are equipped to help blind pedestrians cross the road. The city intends to improve this situation in the coming years, but these figures show that the incentive does not have as much impact as the legal obligation.

The technical characteristics of French APS are described in the NF S32-002 standard intended for the use of the blind or visually impaired persons published in 2004. A decree of 2006 makes it compulsory to bring up to this standard all new installations and whenever road work is carried out on a crossroad.

In Canada, there is no standard per se, but “Guidelines for Understanding, Use and Implementation of Accessible Pedestrian Signals” published in 2008. The installation of new APS is subject of a prioritization according to well-defined criteria:

⊗ Configuration of the crossroad and complexity of pedestrian crossings: width of streets, speed of vehicles…

⊗ Difficulty of crossing the street without the help of APS: complexity of traffic flows or lack of sound cues…

These prioritization criteria are intended to sort out user requests, which can not all be met due to limited budgets.

Most APS installed in Quebec operate permanently. On the walk phase, a melody is emitted throughout the entire phase. However, this system tends to disappear in favor of on demand activation, in order to limit noise pollution.

On demand activation APS emit a short, regular and permanent location beep. This beep allows visually impaired people to locate the push button used to activate the audio message on the walk phase. Simply press this button briefly or keep it pressed until a confirmation beep is emitted.

In France, all APS operate by activation. And almost always, they are only activated using a standard remote control that blind or visually impaired people can get from their town hall or associations specializing in visual impairment. Only the city of Paris, because of its very strong tourist traffic, keeps the possibility of activating the APS by a push button fixed on the mast of the traffic light.

The push button allows anyone to activate the APS without the need for specific equipment. However, it represents a difficulty for blind people. They must first locate the pedestrian crossing, then look for the mast, which is sometimes several meters away from the crossing, and finally find the button. The activation by a remote control makes it possible to dispense with all these stages. Good practices exist to organize the distribution system of this essential tool. In addition, it is possible to transfer the functionality of the remote control to a smartphone.

According to Canadian guidelines, APS must play a melody when pedestrians are invited to cross the road. During the wait phase and the release phase, most signals are silent. The fixed white silhouette indicating it is safe to cross is indicated by a carillon on the East-West axes, and by the sound of the cuckoo on the North-South axes.

For long crossings, the sound is emitted alternately on both sides of the road, so that visually impaired pedestrians can keep their direction while crossing.

An audio message may be broadcast at the push button location during the wait phase indicating the name of the street and information on the geometry of the crossroads to facilitate the crossing. This measure is however optional.

The French standard, on the other hand, provides for 3 types of audio indications: the audio message “Don’t walk”, the walk start tone and the normal walk tone.

The “Don’t walk” message must always be completed with the name of the street. This allows a visually impaired person to confirm his position. This message is easily customizable thanks to the parameterization tools provided by the manufacturers.

The start of the walk tone consists of a series of characteristic notes easily audible in the ambient noise of the circulation. The normal walk tone is a unique melody described in the APS standards.

Additional information on the Canadian side

According to the Canadian guidelines, other indications can be added to improve the information and facilitate the orientation of the blind or visually impaired:

⊗ A sign indicating the instructions for use of the APS,

⊗ A tactile arrow indicating the direction of the crossing,

⊗ The name of the street in Braille and in relief,

⊗ A relief plan showing the number of lanes, the traffic directions, the orientation of curbs and the presence of refuge islands.

Despite their usefulness, these elements are rarely all present because of the work of personalization and the important cost they generate. Also remember that only 10 to 15% of blind people read braille and are able to decipher a map in relief. The tactile elements also cause hygiene problems.

However, there is a security measure in Canada that France should learn from. In case of activation of an APS, all vehicle have to come to a complete stop, including turning vehicles. People who are blind or visually impaired are therefore no longer at risk of having their path blocked by a vehicle.

Both French and Canadian Accessible Pedestrian Signals (APS) have advantages in terms of safety and use. However, for lack of regulatory constraints, APS are not widely used in Quebec, much less in their full version, which best satisfies the use of blind and partially sighted people.

It must be recognized that French standardization and equipment requirements have considerably boosted the industrialization of new generation of APS. These use advanced technologies in terms of activation, parameterization and maintenance for a very reasonable cost. 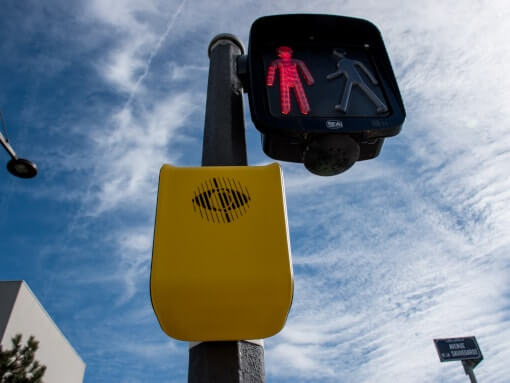