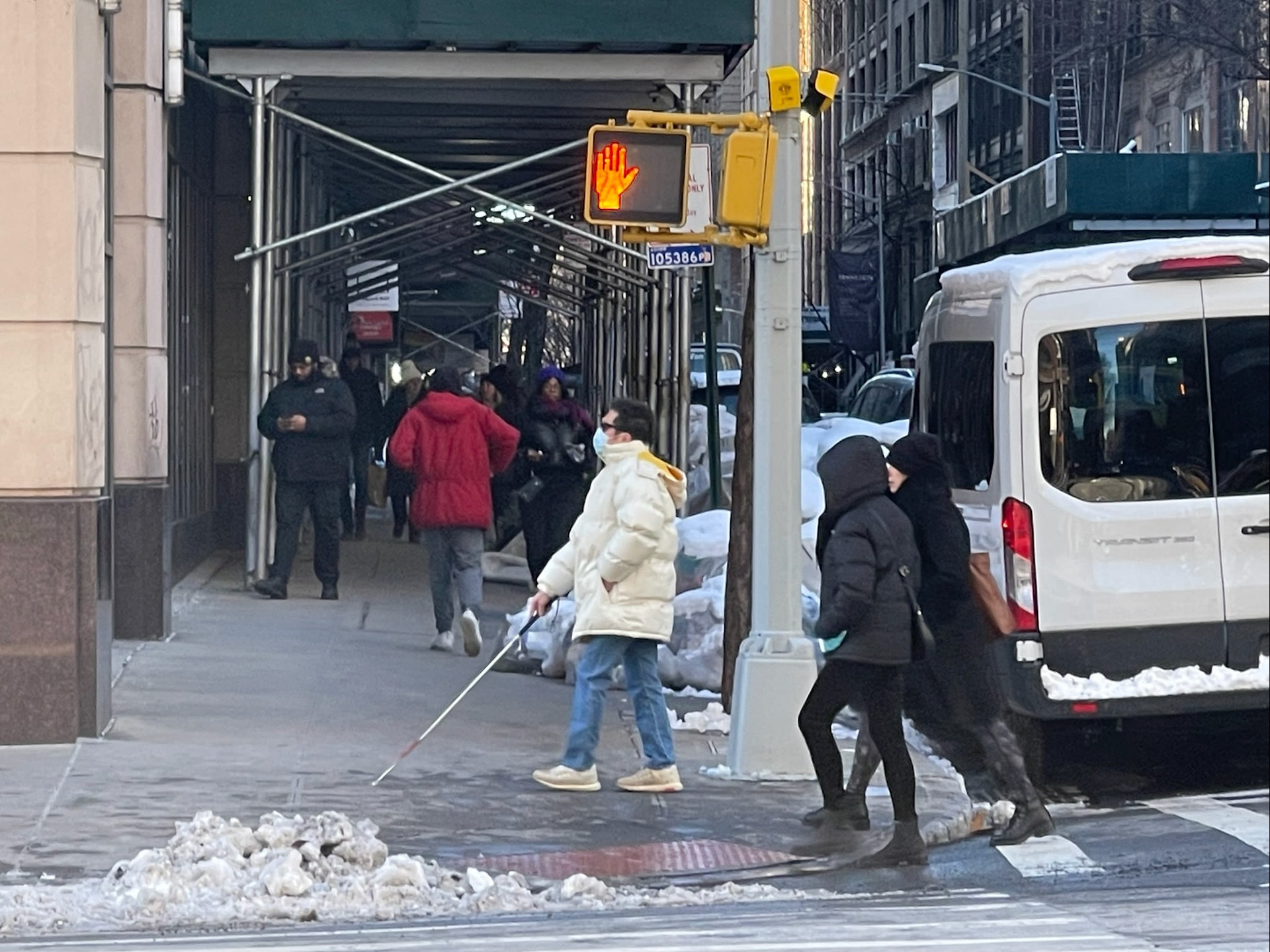 Approximately 12 million American people are affected by a visual disability and no less than 253 million people in the world. Who are they? What are their needs? How can we facilitate their social participation?

It’s referred to visual disability beneath a specific threshold of impairment. But the WHO considers that 2.2 billion people suffer from a vision disorder worldwide. Another notable fact, this figure should double by 2050. We will see in this article that visual impairment covers a wide variety of profiles and causes whose impact on daily life differs from one person to another. But there are major accessibility principles to follow to facilitate access to your services for all these communities!

Blindness, low vision, visual impairment, what is it exactly?

In humans, 80% of the information transmitted to the brain comes from the eyes. The main functions that determine the quality of the vision are:

⊗ Sensitivity to light and

Visual field corresponds to the visible area in front of you when fixing straight at a point without moving. The normal visual field extends 180° horizontally and 130° vertically. Thus, all the elements that enter the visual field (movement, light, color, shape) are likely to attract the eye, even if the perception of details remains the distinctive feature of central vision. The peripheral visual field is reduced in children under 8 and the elderly. Certain eye disorders such as glaucoma or retinitis pigmentosa also considerably reduce the visual field.

Binocular vision is the ability to coordinate the two eyes so that the brain makes a single image from what each eye sends it. It plays a crucial role in depth perception. A lack of alignment or coordination of the two eyes, called strabismus, can lead to loss of vision in one eye if it is not taken care of from early childhood.

Color vision is generally very good in humans, much better than in most animals. However, color vision abnormalities are common. Namely: color blindness affects 8% of the male population.

Visual impairment means that one or more of these functions are impaired.

Visual impairment, or low vision, is defined by a visual acuity between 6/60 to 6/18 or a visual field less than or equal to 20°. The visual acuity taken into account is with the best possible correction (glasses or contact lenses) and in the better eye.

Blindness is the complete absence of vision. The expression “legal blindness” means that the visual capacities of the person are insufficient to be used. People with a visual acuity of less than 20/200 (in the better eye with the best possible correction) or a visual field of less than 10° fall under the “blindness” category.

What accessibility for the visually impaired?

Like other disabilities, visual impairment takes different forms and to varying extents. Blind people resort to the use of their valid senses: hearing, touch, smell, but also the echolocation, cold drafts, temperature differences, etc. People who have low vision act a little differently in that they maximize their visual potential.

The difficulties encountered by blind or visually impaired people in public spaces concern:

⊗ Location and orientation in space,

⊗ The ability to cross the street safely,

⊗ The ability to detect dangers…

In order to improve access to the environment and services for people with a visual impairment, the following recommendations should be applied:

⊗ Detectable warning surfaces to alert to a danger such as stairs, public transit platforms or pedestrian crossings,

⊗ Continuous handrails, contrasting risers and stair nosings to use the stairs safely,

⊗ Tactile signs with Braille and raised print in the elevators,

Because sight is a complex sense, for which many functions are involved, there are as many ways of seeing poorly as there are people with low vision.

Blindness and visual impairment according to the WHO

The WHO distinguishes in its International Classification of Diseases (ICD) five categories of visual impairment numbered from I to V. This classification takes into account the visual acuity with the best possible correction in the better eye and the visual field of the person.

In the United States, there are approximately 12 million people 40 years and over who have vision impairment, including:

⊗ 1 million who are blind,

⊗ 3 million who have vision impairment after correction, and

⊗ 8 million who have vision impairment due to uncorrected refractive error.

81% of people affected by blindness or moderate or severe visual impairment are over 50 years old.

There are also four main types of visual impairment, which have varying impacts on daily life. Sometimes these forms can be combined.

The central part of the retina concentrates the cells responsible for visual acuity. It allows the vision of shapes and colors, but especially details.

People with central vision impairment have difficulty reading, writing and performing precision work. Face recognition also becomes tricky. On the other hand, they retain the perception of space and movement, which generally allows them to move around without assistance.

In people with impaired peripheral vision, the visual field narrows. This is also known as “tunnel vision”. Central visual acuity is preserved but vision is limited to what is just around the eyes’ visual point of fixation.

This type of visual impairment is often puzzling for those around you. Indeed, people with impaired peripheral vision may be able to read the fine print of a newspaper but the next moment bump into a pole, no matter how colorful. They have no global perception of their environment and are unable to follow a moving object. This type of visual impairment is very disabling to navigate independently.

This type of visual impairment is like looking through frosted glass. The luminosity diffuses and makes the contours of objects imprecise. People with blurry vision only perceive vague shapes, which makes contrast, depth and distances difficult to appreciate. The light, especially when it is bright, can become unbearable.

These people are particularly embarrassed for reading, writing and precision work. But they also have great difficulty to navigate, because it is impossible for them to assess the danger and find their way around.

Visual disturbances caused by trauma or brain damage are varied and often associated with other disturbances such as attention, memory or behavioral problems.

In most visual disorders following brain injuries, it is not the visual function itself that is impaired, but the ability of the brain to analyze information.

Many causes of visual disability

Visual impairment can appear at any age of life, due to a harmless birth defect, an illness or an accident.

Worldwide, more than 80% of visual impairments are preventable or curable. This means that better access to hygiene and medical care, especially in developing countries, would greatly contribute to reducing the number of blind or visually impaired people.

In Western countries, the main causes of visual impairment in the elderly are cataracts, glaucoma and age-related macular degeneration (AMD). Diabetic retinopathy is a common complication of diabetes.

Some genetic diseases such as retinitis pigmentosa or Leber’s optic neuropathy can appear in childhood.

Low vision or blindness are also sometimes caused by a malformation of the eyes, oxygen deprivation at birth or an accident during life. Optic nerve damage is irreversible.

In low-and middle-income countries, infectious diseases, myopia and cataracts are among the main causes of visual impairment.

In conclusion, keep in mind that visual impairment takes various forms. Not all people carrying a white cane are plunged into darkness. If you are in charge of the development of a public space or a building, keep in mind that lighting, visual contrast, detectable, tactile and sound cues are essential for the independence of blind or visually impaired people. Their number is expected to double by 2050, it is important to act now.

Find more information about accessibility for people with a visual impairment:

8 Clichés on Accessibility for Blind and Visually Impaired People 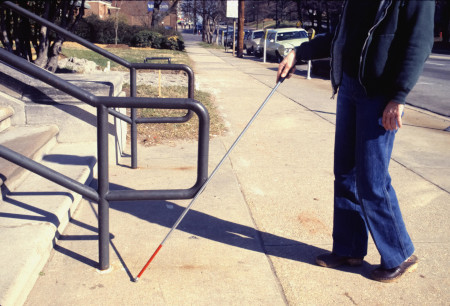 Blind people resort to the use of their valid senses: hearing, touch, smell, but also the echolocation, cold drafts, temperature differences, etc. People who have low vision act a little differently in that they maximize their visual potential.